Season's greetings to you all.......Wishing you a peaceful and creative end to 2016.

Phew! This has been a busy year of felting!

Thanks to everyone who has been along to a workshop or supported me in other ways by purchasing supplies at shows......or helped me at a show: Sue, Hazel and Jane, you have been angels. Dominique is another angel for lending me her Foot Clinic in Llandeilo for the duration of the Tywi Valley Open Studios Art Trail back in the summer. It literally became the Felt Clinic.......

There are also many angels who appear at the Felt Sanctuaries (sorry I can't name you all, but you know who you are). I really love how we are building up a wonderful felting community here in this part of Carmarthenshire, it really has become a genuine 'Sanctuary' for me and those who attend. There has been incredible creativity generated in this lovely peaceful space at Carmel, it has been such a joy to behold all the amazing felt brought forth into the world here! I am very much looking forward to holding more Sanctuaries in 2017. In fact the next one will be Sat January 14th. more info here

Please enjoy a selection of felt creations (some finished, some in progress) by participants from some of the workshops and Sanctuaries in 2016. 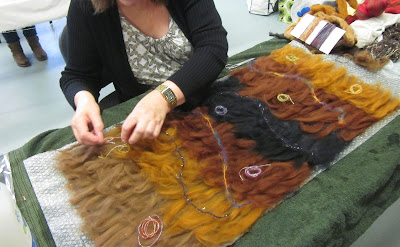 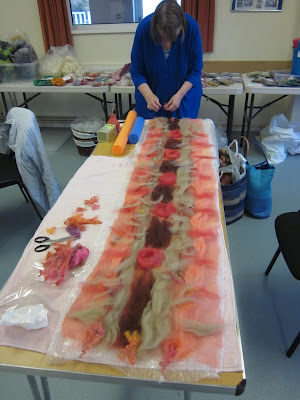 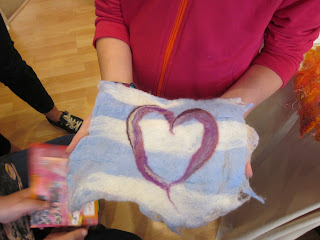 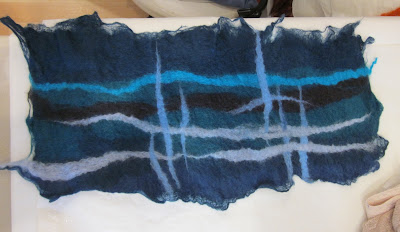 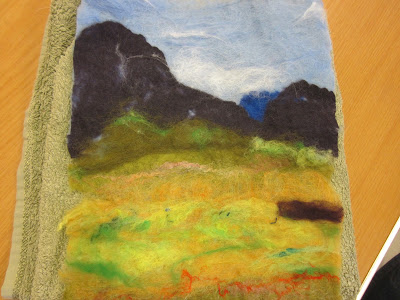 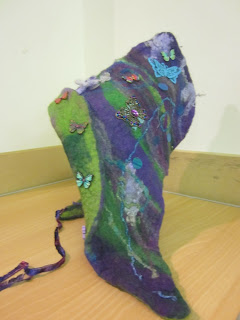 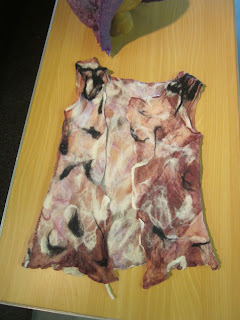 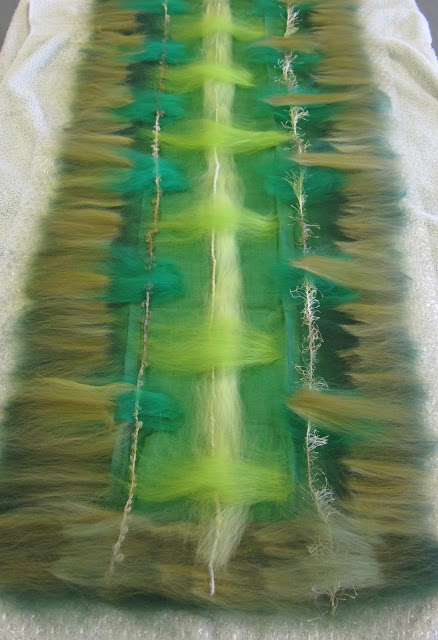 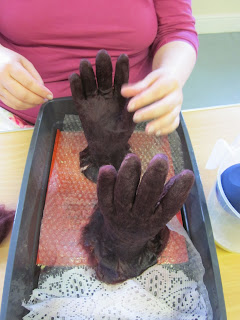 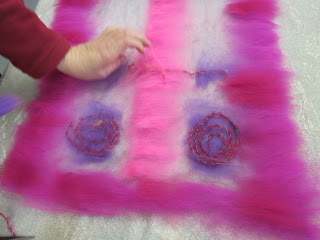 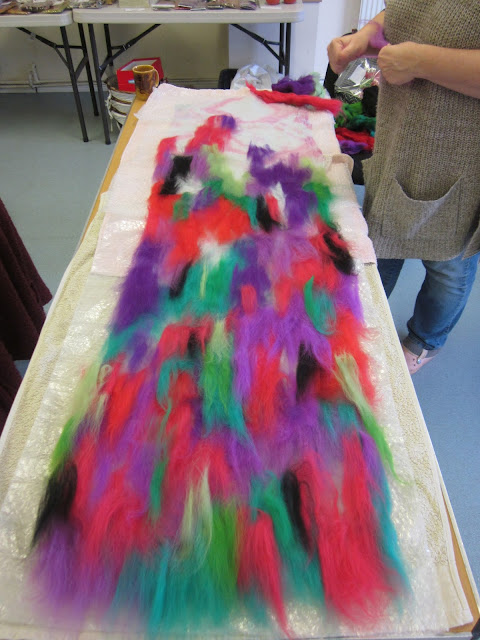 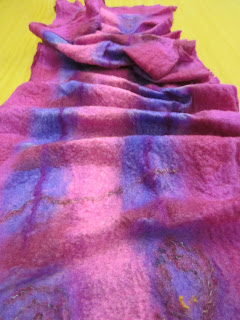 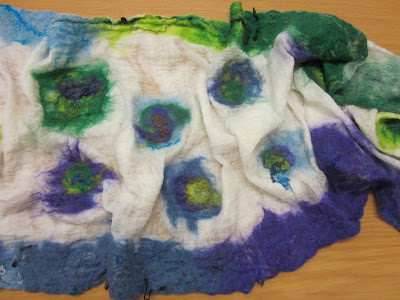 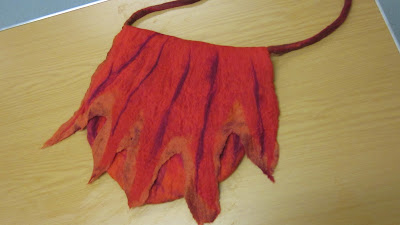 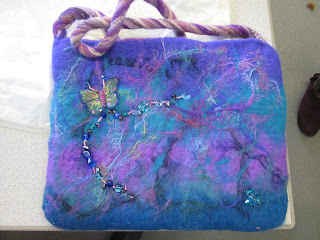 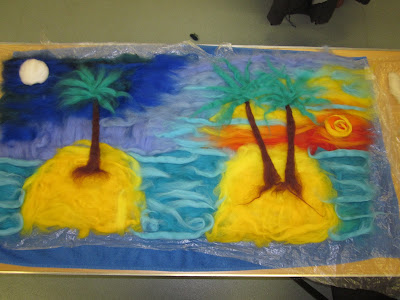 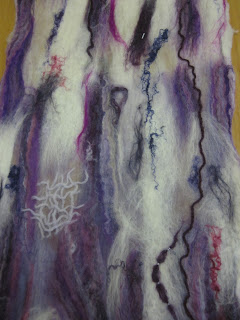 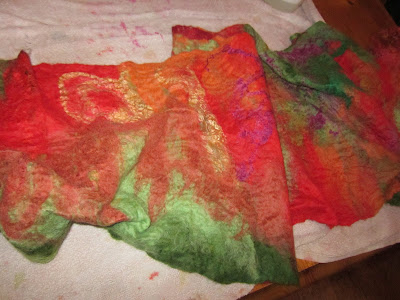 Posted by Calonwlân Felt at 01:06 No comments:

After a busy season of shows and workshops, stocks of felting texture goodies were running low at Calonwlân Felt HQ.

here's how this Blue-faced Leicester fleece 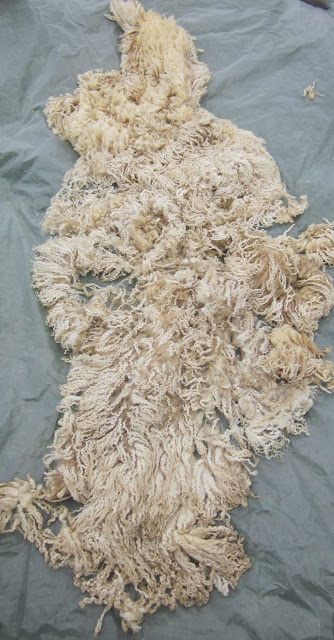 was transformed into this 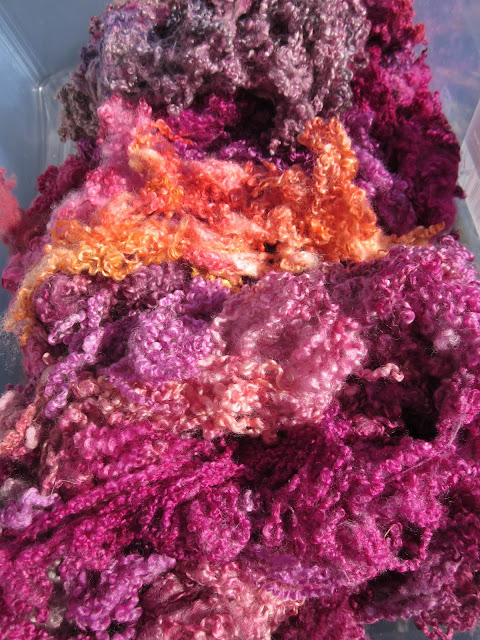 The fleece was 'skirted', which means removing all the dirtiest parts. I laid it out on a plastic sheet on the lawn to do this.

The best parts of the fleece for my purposes are the curliest and softest. This is the shoulder and back area of the sheep, towards the rear the curls tend to be matted or part-felted from all the friction they receive from the sheep lying about in the grass:-) I avoid using these bits.

I divided up the best bits into portions, enough to each fit in a washing-up bowl or bucket. First, each bowl was filled with very hot water with a splash of gentle detergent, I find washing up liquid is more than adequate. A portion of fleece was gently lowered into the hot soapy water. Wearing rubber gloves or using tongs, the wool was pushed down so it was completely covered, with minimum agitation, to avoid felting the wool fibres. Normally I try my hardest to get fleece to felt when I am making a textile but during the washing/dyeing process I am trying my utmost to avoid any felting! 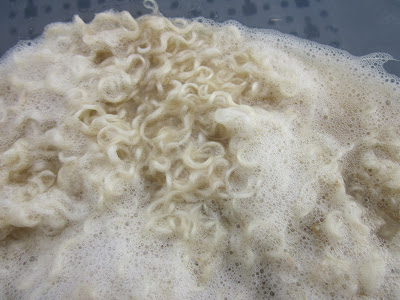 Note: A contrast of water temperature at this point will cause the fibres to felt!

The fibres were gently submerged in the rinse water and were allowed to sit for a minute or two. This was repeated until the water became clear. The fibres were placed in a net laundry bag and the top secured. The bags were put through the spin cycle in the washing machine to remove excess water.

The fleece was dyed while it was damp to allow the dyes to be taken up by the fibres more evenly. 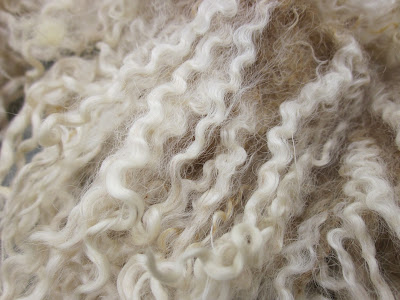 Acid dyes are used to dye protein fibres (wool). The brands Landscape and Gaywool are my preferred dyes, with a fixative already integrated in the powder. Additionally, heat is required to fix the dyes. I use an old tea urn. The urn is half filled with cool to tepid water.

A dye stock was mixed and applied to the fleece. Minimal amounts were used, otherwise there would be much rinsing of un-absorbed, excess dye to do later. Once the fibres were completely covered in dye solution they were placed in a plastic bag and once the bag was sealed it was placed on the surface of the water in the urn.

The water (together with the wool packages) was slowly brought up to near boiling point and then the wool packages were left to simmer for 30-40 minutes. Note again: A contrast of water temperature at this point will cause the fibres to felt. The bags of fibre were left in situ to cool slowly overnight.

The fibre was then rinsed gently in cool water (same method as when washing the fleece earlier) until the water was clear. Remember, any contrasting temperature would cause the fibres to felt. Moving the fibres about when hot may cause felting also. The dyed fibre was put in net bags again and put through the spin cycle in the washing machine. The fibres were left out to dry in the net bags on the washing line.

When dry, the fibres were admired, weighed and packaged up, labels applied and phew, I then collapsed in a happy heap :-) 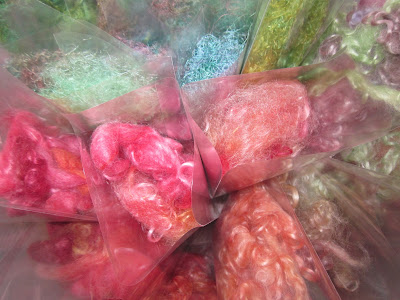 sometimes I had some help with the packaging up..... 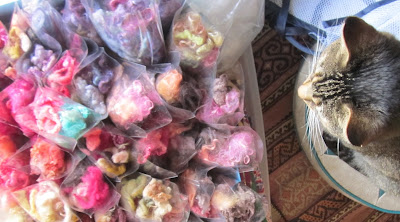 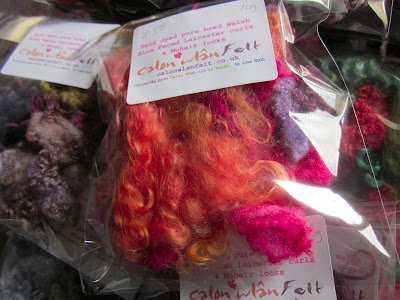 
Now comes the best bit,
what to do with all the lovely fibre goodies? 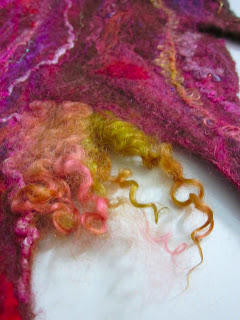 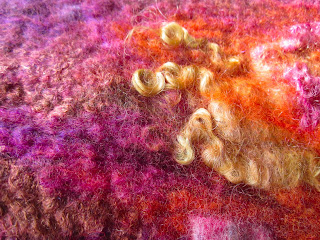 What are you waiting for?

Copyright Sarah Enoch 2016
Posted by Calonwlân Felt at 21:38 No comments: